Contemporary Scottish Artist, Gerard Burns has just released his painting of prominent Clinician and Founder/Director of the Glasgow Memory Clinic, Doctor Fraser Ingles, to coincide with National Armed Forces Day, as all proceeds from the painting will be donated to Erskine Veteran’s Charity.

Fraser’s portrait is one of 14 that will be part of his “14 for 14” multi charity, fundraising exhibition that will take place in The Banking Hall in Clydesdale Bank’s head office in St Vincent Street, in Glasgow, this July, during the Commonwealth Games.

Gerard, who regularly donates his paintings to charity, thought that his own contribution to 2014 would be to organise a multi-charity event that celebrates each significant character he has chosen to paint whilst raising funds for each of his sitters’ chosen charities.

“I wanted to paint Fraser as he is a unique character and strongly believes the arts must be supported. A modern day patron, his enthusiasm and childlike excitement are completely infectious. Fraser has been a significant mentor in helping me develop as an artist over the last five years and very supportive in shaping the direction of where I am headed. I am eternally grateful for his support. I have great admiration on his research and development work around Dementia and Alzheimer’s and his fundraising work for Erskine, Veteran’s charity.”

“My chosen charity for the proceeds of the painting is to go Erskine Veteran’s Charity. Their Dementia Care is a small part of their care and nursing programme and they truly do great work. I lam really impressed with the portrait that Gerard has done of me and I have to admit feel really quite emotional about being confronted with an exact image of myself. I am immensely flattered to be one of Gerard 14 sitters and to be part of the overall project.”

“Gerard has been a private banking customer for many years so it gives us great pleasure to support his latest exhibition, 14 For 14. It is also gratifying to know that the funds raised by the exhibition will be donated to some fantastic causes.  We look forward to welcoming art lovers to our head office in Glasgow over the month of July, including visitors who are attending the Commonwealth Games.” 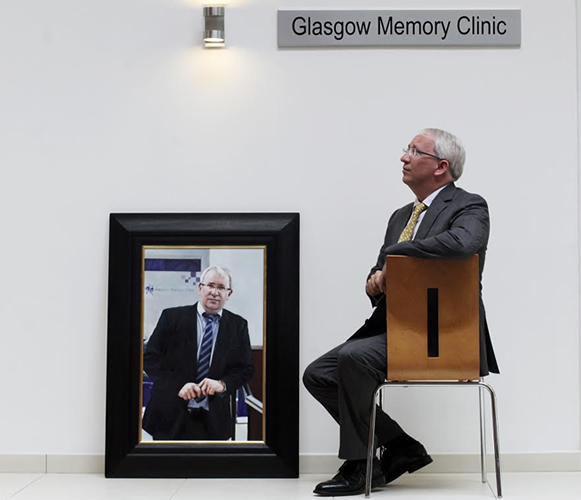